Rife Machine: How could it help cancer?

When we think of cancer treatments, we often think of having to take certain drugs. Chemotherapy. Targeted therapy. Immunotherapies. All kinds of biological agents can be administered into the body with the goal of destroying cancer cells or shrinking tumors. Along with surgery, drugs are the most common form of cancer treatment.

Unfortunately, many of these therapies come with their own benefits and drawbacks, such as severe side effects. 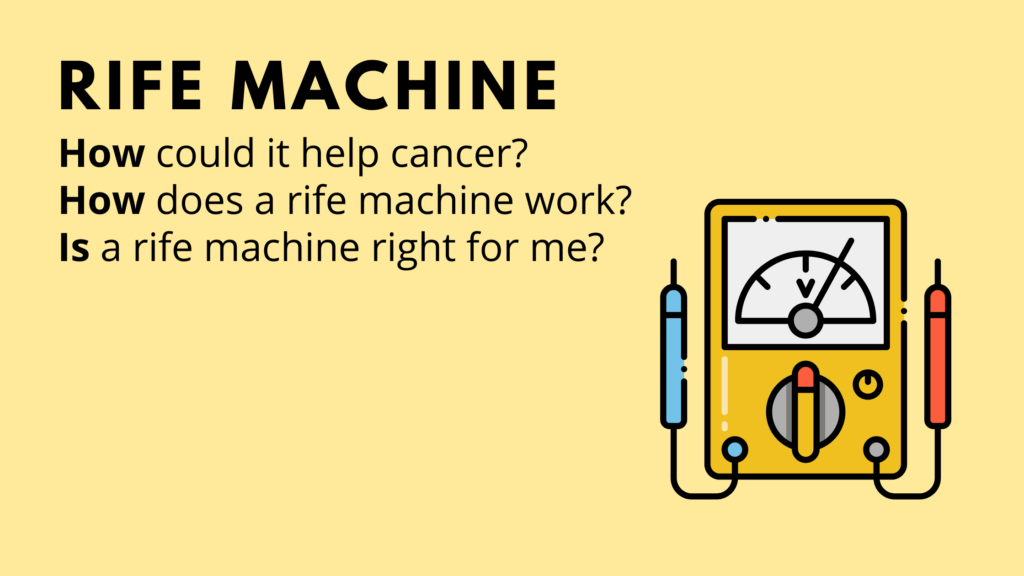 But what kinds of non-pharmaceutical agents exist for the treatment of cancer? One option that has been around for just about a century is the rife machine, a device designed to target cancer cells without the need for pharmaceuticals. Keep reading to learn more!

What is a rife machine?

A rife machine is a medical device that was first invented by Dr. Royal Raymond Rife, who was a researcher studying bacteria at Johns Hopkins University in the 1920s. During this time, Dr. Rife drew on the research of others who had shown that all matter vibrates. While every kind of matter has a very different vibration “frequency,” these frequencies can all be studied, monitored, and measured.

More specifically, Dr. Rife based his work on a field of theory called “radionics,” or “electromagnetic therapy,” that uses frequencies as a way of treating diseases, including those caused by viruses and bacteria.

Initial studies of the rife machine, which included about 16 terminal cancer patients, showed favorable results, possibly spurring interest in the device. Specifically, of the 16 patients, 14 were cured of their cancer after treatment with a rife machine.

In its current configuration, the rife machine is usually made of two devices that are used to produce electromagnetic energy and pass it through either the hands or the feet.

How does a rife machine work?

A rife machine uses the concept of frequencies to produce electromagnetic energy, which targets and destroys cancer cells. So how does that work?

Dr. Rife himself compared his device to the idea that an opera singer could break glass simply with their voice. The idea behind this is that, if the right frequency is achieved, it would create enough vibration that the glass would break and shatter.

Applied to cancer cells, the idea is that passing the right frequency of electromagnetic energy through the body could cause cancer cells to vibrate just enough that apoptosis, or cell death, is triggered.

Is a rife machine effective as a cancer treatment?

Some research suggests that, as part of its therapeutic benefit, a rife machine could help prevent cancer cells from replicating and spreading.

However, some of the theories behind the rife machine were called into question many years ago (for example, some research attempted to debunk the idea of radionics).

There is also just overall little research that has been completed on the rife machine. That’s because rife technology hit a bit of a snag around the time of its emergence, by the American Medical Association, in particular. Though there is some speculation about why this happened, a U.S. Appeals Court found that the AMA refused to publish any research about a rife machine because, as a “new medical technology,” it posed potential threats to drug companies, which the AMA appeared to favor.

As a result, interest and studies of the rife machine didn’t really pick up again until sometime in the 1980s. Currently, there is no concrete evidence a rife machine is a safe and effective cancer treatment. But that doesn’t mean there isn’t any evidence exploring a rife machine’s potential effectiveness. There is, perhaps, simply a need for more studies.

What are the risks and benefits of using a rife machine?

One potential benefit of a rife machine is that studies have shown that it can target cancer cells without harming healthy cells. This is a welcome contrast to other treatments, like chemotherapy, which aren’t able to target just cancer cells. They target any fast-growing cell, which includes hair and gut cells in the human body that are healthy.

Another helpful benefit of the rife machine is its ability to tune to and detect a range of different frequencies. As a result, a rife machine could be a helpful tool for treating and detecting a range of cancers.

Is a rife machine right for me?

While a rife machine doesn’t have formal approval from the FDA as a cancer treatment device, you should talk to your doctor about a rife machine if you are interested. They can answer any questions you have and help you determine an effective treatment plan.