The search for new cancer treatments is a rigorous process that requires extensive testing of new treatments for safety and effectiveness. The challenge has been to balance the risk of side effects with a more effective drug.

One of the more controversial treatment options that’s been studied for cancer treatment is ozone therapy. While that may sound odd, there is some evidence showing ozone could have some impact on cancer cells (though much more research is needed). Keep reading to find out how ozone therapy works. 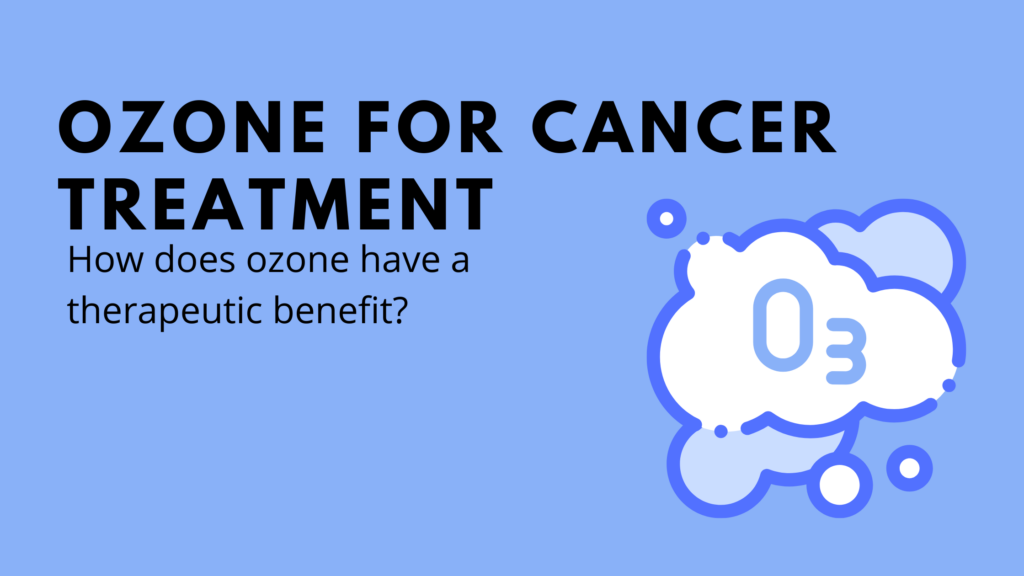 If you’re familiar with the term ozone, you may be wondering why you’re reading about it in an article about cancer.

If you’ve never heard of ozone before, here’s a brief overview.

Ozone is a gas made up of three oxygen molecules (O3). There’s actually ozone in our own atmosphere; a layer of it is found high up in the stratosphere, and helps protect us against harmful radiation from the sun.

However, pure ozone can actually be harmful when breathed in, which makes it more disturbing to know that ozone is produced lower to Earth. Only this time, it’s made by humans. Sometimes called smog, the chemicals produced by the burning of fossil fuels can provide precursor chemicals for the creation of ozone.

How does ozone have a therapeutic benefit?

The description of ozone as a harmful gas may make you even more curious why ozone is being discussed as a cancer treatment. So how is ozone used?

Well first, research suggests that ozone has been studied for therapeutic benefit for quite a long time: at least a century, in fact. Specifically, ozone has been studied for several uses, such as a way to treat and disinfect injuries. That’s because the presence of oxygen molecules can be used to inactive certain bacteria and other infectious antigens by activating the immune system and oxygen metabolism.

Research also suggests that the interaction between ozone and fluids in the body results in the creation of more blood cells, increasing oxygen supply throughout the body. This unique feature, according to some research, suggests that ozone therapy could be a helpful treatment for people with breathing conditions.

Because of its ability to inactivate bacteria and other germs, ozone is also used as a disinfecting tool for medical tools and supplies.

How is ozone used in cancer treatment?

In short, ozone therapy has been studied in the past and shown to have some effect on damaging tumor cells while also improving the effectiveness of other treatments, such as chemotherapy and radiation. So how does this work?

An early study in 1958 described ozone as having a very similar effect as radiation therapy, hinting at ozones mechanism of action.

Throughout the decades, research has shown that ozone does seem to affect the development of cancer cells. Specifically, it’s been shown to have cytotoxic (toxic to living cells) effects in a range of cancers, including colon cancer and breast cancer.

Ozone has also been shown to have an effect on tumor hypoxia, which refers to a process where tumors don’t get enough oxygen because they’ve gotten too big. Tumor hypoxia can even lead to chemotherapy resistance, making these cancers harder to treat. Some research has shown that ozone could improve tumor oxygenation and reverse some of these resistance effects.

While there have been some studies exploring ozone therapy in humans (for example, a study investigating how ozone therapy helps with neuropathy caused by chemotherapy), a lot of studies completed to date have been in vitro studies. That means cells are removed from a person and studied in a laboratory setting to see how they react to ozone therapy. While these studies have shown some favorable results, much more research is needed (including research in humans) before any conclusion can be drawn about using ozone therapy in cancer treatment.

How is ozone therapy administered?

There are generally three ways ozone therapy is administered, depending on what it is being used to treat. It could be applied to your skin, mixed with your blood and given through an IV, or as an injection in the muscle.

What makes ozone therapy such a controversial treatment option are the risks involved. It is, after all, toxic in its pure form. That’s why the FDA has generally concluded that based on available research, there is not enough evidence to suggest ozone therapy should be considered safe and effective.

But still, research continues to grow, highlighting ozone therapy’s potential benefits and ways to deliver the therapy safely. It’s important to talk to your doctor about any and all possible treatment options.