The search for cancer treatments has led people to look beyond just chemotherapy and radiation treatment, which are both known to have high rates of adverse effects, or side effects. But when it comes to new cancer treatments, where should you look?

Some have drawn inspiration from nature itself; specifically, researchers have explored a synthetic form of a compound found in the pits of some fruits, called amygdalin, as a possible option for cancer treatment Keep reading to learn more! 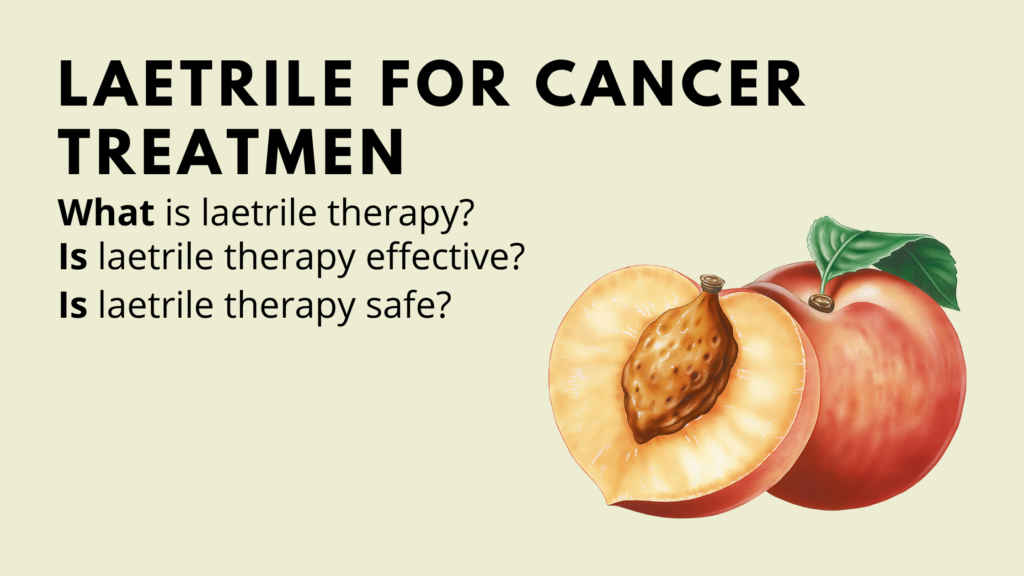 Laetrile is a synthetic, human-made version of amygdalin. It’s a word derived from two other words: laevorotatory and mandelonitrile, referring to how laetrile is made and what amygdalin produces once ingested.

Despite its complicated name, amygdalin is a compound in organic materials, such as the pits of fruit, raw nuts, and more. It’s most common in fruits like apricots, apples, cherries, or almonds.

Amygdalin has also been referred to as vitamin B17, though this designation does not mean it’s approved as a formal “vitamin” by the American Institute of Nutrition Vitamins.

Interestingly, amygdalin converts to cyanide when ingested, which can cause cyanide poisoning if the right amount is ingested. This is, in some ways, part of how laetrile therapy is designed to work as a cancer treatment. It’s usually only present in small amounts, however, so it often doesn’t cause much harm in its natural form.

As a synthetic compound, laetrile was designed to be less harmful than natural amygdalin. It was developed in 1920 by Ernest T. Krebs based on a theory he developed that amygdalin, in the right concentration, could be a helpful way to treat cancer.

What is laetrile therapy?

Through the use of a partially synthetic version of this amygdalin, laetrile therapy uses the toxic properties behind amygdalin and cyanide to target and kill cancer cells. It can be taken either by mouth or through an IV infusion into the bloodstream.

Specifically, laetrile therapy uses the concept of apoptosis, or programmed cell death, to its advantage. Cells grow and replicate regularly all the time, often to replace cells that are too old. However, this cell replication process isn’t without its issues. Errors can occur, such as errors created in DNA when the cells try to replicate their genetic material. This can often be a sign of cancer cells forming. Apoptosis forces the cell to die. Cancer cells, however, can turn this process off.

Laetrile therapy may be able to activate apoptosis through the presence of certain doses of cyanide.

Unfortunately, there is still very little evidence regarding the effectiveness of laetrile therapy as a cancer treatment. In fact, many of these studies have been conducted either in animals or in vitro, which means cells were studied outside the human body to learn about laetrile’s effects. As a result, there is a need to know more about how it affects cancer cells in the human body.

Some studies, however, have shown that laetrile can have positive effects on certain kinds of cancer, such as prostate, cervical, breast, and kidney cancer, among others.

Other research suggests additional, promising findings, such as the following:

Based on existing research, laetrile therapy does carry some risk. There are still a lot of unknowns about laetrile as a cancer therapy that can make it unsafe, including which types of cancers it’s more effective at targeting and optimal dosing. Dosing, in particular, hasn’t been established, so it’s unclear what dose amount balances safety and efficacy.

The biggest risk associated with laetrile therapy is cyanide poisoning, which can cause nerve damage, liver damage, comas, or even death. In its natural form, you can consume some amount of amygdalin and be safe. However, laetrile, as a synthetic form, is not very well regulated, so it’s unclear what might be in the product you are consuming.

The FDA banned the use of laetrile in 1987, though you can still find laetrile online. However, it is not marketed as a cancer treatment product.

Before choosing to take laetrile for cancer, talk to your doctor. They will help you determine the pros and cons of this treatment, or potentially suggest alternatives.