Chemotherapy has been the gold standard for cancer treatment for many years. While it has proven effective for certain cancers, it can also cause a range of side effects, including hair loss and gastrointestinal distress.

That’s because chemotherapy works indiscriminately. It targets any cell that replicates quickly which, while including cancer cells, can also include gut and hair cells. So while chemotherapy can be particularly toxic to cancer cells, the body has to pay a price

Insulin potentiation therapy (IPT) has emerged as a possible cancer treatment in recent years, particularly in conjunction with chemotherapy, as a way to more directly target cancer cells and reduce side effects. Keep reading to learn more. 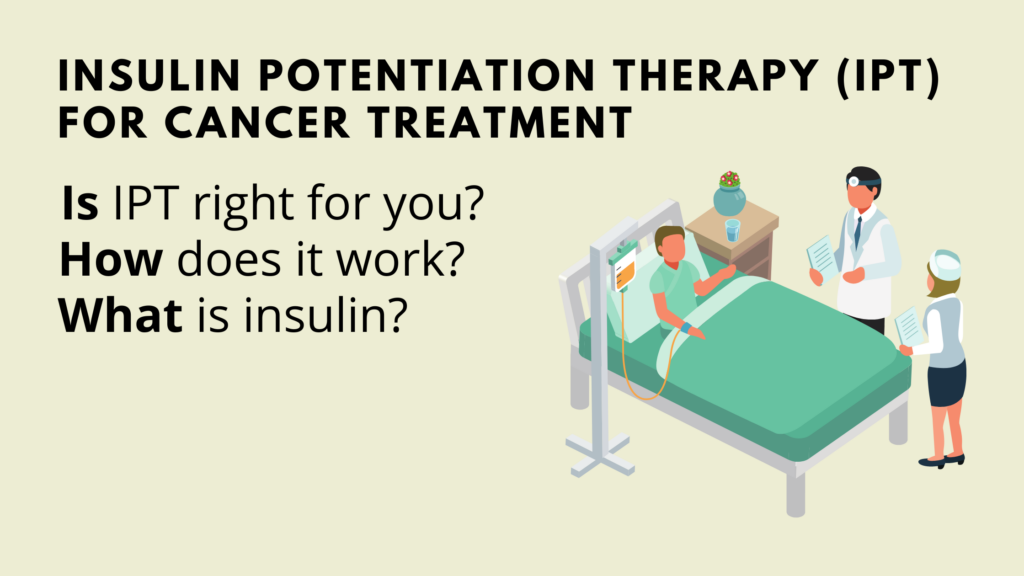 First, let’s talk about the “insulin” in insulin potentiation therapy (IPT). You’ve probably heard the word, and you may likely associate insulin with diseases like diabetes. So, you may be wondering why insulin is being used for cancer.

Insulin is a hormone that is normally produced in the pancreas. Food gets broken down into glucose, which enters the bloodstream. In response, the body releases insulin to help glucose enter cells so it can be used for energy. That’s why people with diabetes have to take insulin: their body isn’t responding to it, so they need additional insulin to help. Otherwise, the glucose in their body builds up and causes damage. Interestingly, research suggests that excessive levels of glucose (hyperglycemia) may play a role in cancer progression because more glucose is present for cancer cells to use for energy.

What’s really important to remember is that insulin helps molecules get into a cell, a key mechanism that could work against cancer cells.

What is insulin potentiation therapy (IPT) and how does it work?

Insulin potentiation therapy (IPT) was first invented in 1932 by Dr. Donato Perez Garcia in Mexico, though it was not originally designed for the treatment of cancer. That theory came later. In fact, it was initially formulated to treat syphilis in the United States.

When it comes to cancer, IPT uses the mechanisms of insulin against cancer cells. Specifically, it uses insulin to help chemotherapy enter cells and increase its effectiveness. Here’s how.

All cells have receptors on their surfaces, which help them communicate with each other and receive important nutrients and molecules. Receptors are designed to be very specific, so only certain molecules can latch to certain receptors and gain access to a cell.

When it comes to cancer cells, researchers have found they have significantly more receptors on their surfaces than healthy cells. Because of this, cancer cells are much better at competing with healthy cells for food, especially glucose.

Receptors for insulin, specifically, are much more active and numerous on cancer cells. As a result, cancer cells are able to get more nutrients and continue to grow and replicate. IPT uses the greedy behavior of cancer cells and the abundance of insulin receptors against cancer cells.

By administering insulin, the body experiences a drop in blood sugar levels. While healthy cells have mechanisms to ride out these momentary blood sugar drops (e.g., they start burning fat) cancer cells do not. Because the administered insulin attaches to the insulin receptors on the cancer cell surface, the cells open up their receptors in the hopes of getting any and all glucose inside so they don’t starve and die. As a result, the cells’ proverbial defenses are down. Anything could just walk in.

Then, a fraction of the standard amount of chemotherapy is administered (about one tenth the normal amount). Cancer cells become the main target because their receptors are wide open. In theory, IPT should allow for chemotherapy to target just cancer cells and minimize many of the unpleasant side effects of chemotherapy.

IPT has been explored for a range of cancers, such as prostate, and shown favorable results.

Is insulin potentiation therapy (IPT) right for you?

While insulin potentiation therapy (IPT) has shown some promise in research and in theory, there is a lot more research needed to definitely prove its effectiveness. IPT comes with its own set of risks because blood sugar dips after receiving insulin. These risks include shock, stroke, or seizure.

There is also some concern that the low doses of chemotherapy may still not be enough to destroy a tumor, only keep it from spreading. This could lead to the development of cancer cells that are resistant to chemotherapy, making them more difficult to treat.

If you’re curious about IPT, talk to your doctor.