Many cancer therapies benefit patients but their administration is limited to clinical trials. Dichloroacetate (DCA) is one such therapy that has anti-cancer properties supported by an extensive body of literature. In this article, we explore the pros and cons of DCA cancer therapy. 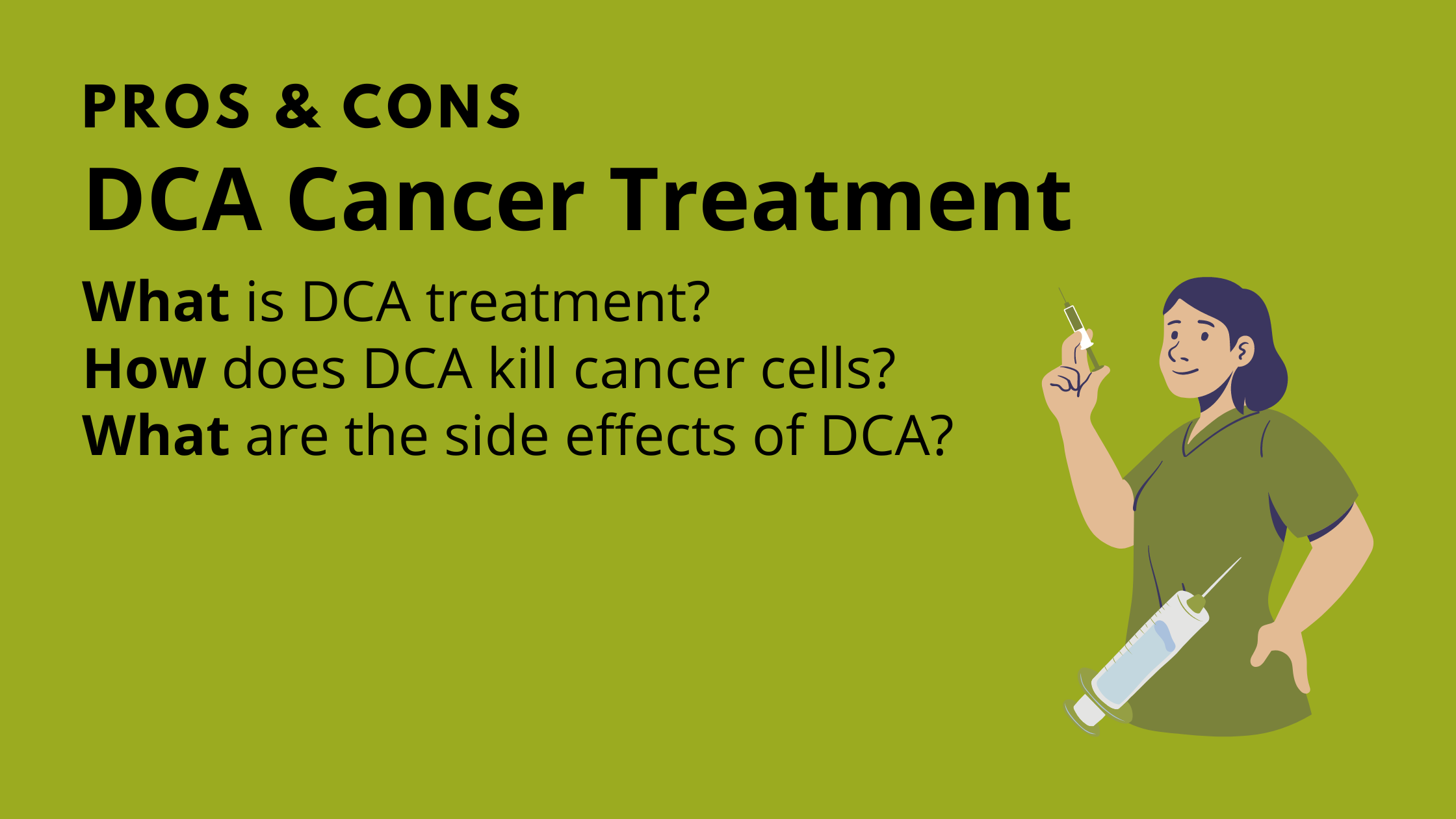 What is DCA treatment?

Dichloroacetate (DCA) is a synthetic chemical that is most commonly available as a cauterizing agent.

However, recent research suggests that certain formulations of DCA can have metabolic effects in the body as a mitochondrial pyruvate dehydrogenase kinase inhibitor. So what does that mean?

The most common activity that produces lactic acid is exercise, where energy is needed but the body doesn’t get as much oxygen as it needs. The buildup of lactic acid can create an acidic environment around muscles, leading to soreness and the fiery feeling you get during a strenuous activity.

So while lactic acid isn’t inherently bad, the excessive buildup of it is. This buildup of lactic acid can lead to other conditions, such as kidney problems, pulmonary hypertension, or even make cancer worse.

But don’t worry, exercising isn’t going to heighten your risk of cancer. Many other conditions, though, can cause lactic acidosis. Excessive alcohol use, for example, requires the body to break down the ethanol in alcohol, which can shift the body more towards anaerobic activity. It’s the acidic environment created by too much lactic acidosis, though, that can create an environment where cancer cells thrive.

DCA has also been explored for health conditions where cells have similar metabolic activity and lead to scenarios similar to lactic acidosis, such as endometriosis or dementia.

How Could Dichloroacetate (DCA) work as a Cancer Treatment?

Recent research has examined how dichloroacetate (DCA) targets the metabolism of cancer cells. Specifically, research suggests that DCA works by stopping a specific enzyme from working in cancer cells, the pyruvate dehydrogenase kinase.

In several types of cancer cells, the pyruvate dehydrogenase kinase is activated. When this happens, it can change cellular metabolism away from normal functioning and help cancer cells continue to grow and replicate.

For example, processes that cause lactic acidosis can cause some of these metabolic changes, leading to development of cancer cells and an environment that promotes the growth of more cancer cells.

Research has shown that pyruvate activation can prevent cells from engaging in apoptosis. Cells have a highly regulated way of replicating to make more cells (that’s the basic premise behind how we grow and heal) called the cell cycle. Apoptosis is a natural and normal part of this process where cells that have issues (such as damaged DNA) die off to prevent the formation of cancer cells and tumors. Cancerous cells usually turn apoptosis off so they can keep growing.

Existing research suggests that DCA, by blocking the pyruvate dehydrogenase kinase, can prevent these metabolic changes. In doing so, DCA may allow apoptosis to resume and allow unhealthy cells to die before they can become cancerous or form tumors.

However, more research is needed to understand the best ways to use DCA for cancer treatment. For example, some research shows that DCA can block its own metabolism with repeat dosing, which makes it challenging to determine an optimal dose for treatment.

How does DCA kill cancer cells?

Cancer cells have a high rate of glycolytic activity (the breakdown of glucose to obtain energy). They also have reduced mitochondrial oxidation, which is known as the Warburg effect. The high rate of glucose breakdown leads to excessive production of lactate in the tumor environment, a state known as metabolic acidosis. The tumor cells use the lactate to support their growth and prevent apoptosis (programmed cell death). DCA selectively targets cancer cells, forcing them to shift their metabolism from glycolysis to mitochondrial oxidation. This makes it impossible for malignant cells to sustain the demands for cellular energy. Moreover, by limiting lactate production, DCA counteracts the acidic tumor microenvironment, leading to inhibition of tumor growth.

What are the side effects of DCA?

Dichloroacetate (DCA) treatment is considered safe and nontoxic. The most common side effects of DCA treatment include gastrointestinal signs and symptoms. A limiting factor in the clinical use of DCA as a cancer therapy is the potential for peripheral neuropathy (damage to the nervous system). Administration of antioxidants can help minimize DCA-induced neuropathy.

How is Dichloroacetate (DCA) used at Cancer Treatment Centers?

Dichloroacetate (DCA) is available in many forms (including powders and pills) and is available as both an over-the-counter type of medication. However, because DCA is not approved by the FDA, cancer treatment centers can’t yet prescribe a pharmaceutical-strength form of DCA.

Regardless, it’s important to talk with your doctor before starting any new medications. If you have questions about DCA as a cancer treatment, talk to your provider to develop a treatment plan.